(Closed and reopened with different chef and owner)

Meet daGemi: The Italian restaurant with Sicanian roots set to open in Chinatown Vegas, this fall.

The trio of Lucia Sangiorgio (Mom), James Muscaglione (aka Gemì), and Michael Power look ready to challenge the status quo in the food business industry with the upcoming launch of daGemì ristorante + putia. The restaurant, which focuses on specialty foods and recipes, seeks to fill a void in what is arguably America’s best foodie neighborhood. daGemì ristorante will open on October 11, 2021, in Chinatown Vegas, Spring Mountain/Wynn Rd, the former “Vegas Noodle House Location.”

The restaurant will offer dishes made from recipes that have hitherto remained a family secret for over two centuries. daGemì ristorante + putia will feature ingredients and artisan products from an area the Romans called “the breadbasket of the world.”

Wine Spectator magazine honored Foro Italico with their “Award of Excellence” several years in a row. Among her loyal diners were Shania Twain, Whitney Houston, the Sopranos cast, players from the Giants, Jets, Mets, and Yankees, the late Abe Vigoda, and many others.

After leaving the restaurant business in NJ, Lucia continued to study and celebrate food by enrolling and completing a pastry course at Johnson & Wales University in Rhode Island. Today, Lucia lives in North Las Vegas where she will consult with her partners on the opening of daGemi.

James Muscaglione (aka Gemì) – James/Jim/ Jimmy first started his education at the age of 9 in family restaurants as his mother Lucia’s assistant. 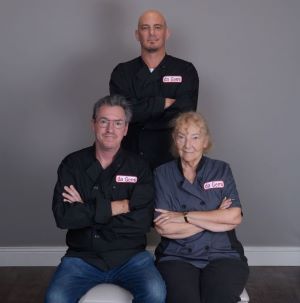 Yearly trips to Sicily furthered his passion for fine foods and wine. At age 19 after cooking at a James Beard event, he was inspired to open his first restaurant Trattoria Mezzojuso, after his hometown in Sicily, where he garnered Best New Restaurant and Best Italian Restaurant Awards from the prestigious NJ Monthly magazine. James has unique credentials having worked equally in both kitchen and dining rooms

James worked his way up the ranks by working with celebrity chef Mario Batali and restaurateur Joe Bastianich at the prestigious New York Italian mecca – Babbo. In early 2000, Jimmy moved to Las Vegas to help launch other B&B hospitality group restaurants such as Enoteca Otto and Carnevino Steakhouse. In addition to the B&B group, he also worked with culinary powerhouses Alain Ducasse (Rivea), Thomas Keller (Bouchon), as well as the Wynn and at Carbone inside the Aria.

He started his culinary education in Australia before permanently moving to the USA. He furthered his culinary journey with bi-annual culinary excursions to our birthplace; Sicily, where most of our recipes and dishes derived. In 2009, Michael jointly opened Villa Locale in Pahrump, the first “seed to table” concept in the State, if not the country. In addition to cooking at da Gemi, Michael will be tending his local garden where he will be growing basil, mint, cucumbers, garlic, onions, artichoke, cardoons, lettuces, eggplant, figs, and persimmon organically for da Gemi.

For more information about daGemì ristorante + putia and other businesses in Chinatown Las Vegas, visit – http://chinatownvegas.com/